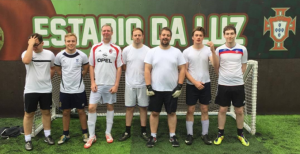 With what seemed like the entire Grant Thornton organisation making the trek up to Scotland for the annual Grant Thornton Football Tournament, the Scotland interns thought it would be a great opportunity to capitalise on this with a bake sale! For those who don’t know, interns have been charged with raising money for a lending initiative that enables you to choose entrepreneurs to invest in who might otherwise struggle to find investment, and subsequently watch their business grow. 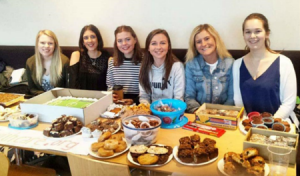 Being blessed with characteristically mixed Scottish weather, interns from both Scotland offices brought in cakes and set up stall, hoping to make the most of the “surprisingly” fragile state of the majority of players throughout the day. The stall managed to raise just over £200 in total with their solid techniques in harassing anyone who come near into buying cake. A solid Friday night shift of baking in preparation for the day ahead left us with an abundance of cakes, scones and brownies, with the Glasgow office being the lucky recipients of having leftover cake for days as a result of our efforts.

In a winning run that included a 6-2 humbling of Scotland B’s, fans will be sad to hear that the C team ultimately crashed out on penalties in the quarter finals to eventual finalists Liverpool A’s. It wasn’t a wholly unsuccessful day for Scotland however, with the A team avenging us by beating Liverpool A’s in the final to make sure the cup was staying firmly in Grant Thornton Glasgow office’s trophy cabinet. As interns, we all had a great day and it was awesome to meet and chat to people from across all of Grant Thornton’s offices and departments. Now entering week four of my internship with Grant Thornton I have played in two five aside football tournaments, had several after-work social events and even have an evening at the Edinburgh Fringe festival to look forward to at the weekend – and in the process been able to raise £200 to invest in a bakery business in Zambia. Wow.

Previous article:
A Day in the Life of a (Trainee) Tax Investigator – Anusha
Next article:
GT Football Tournament 2016 – A Norwichian Account
Back to Blog