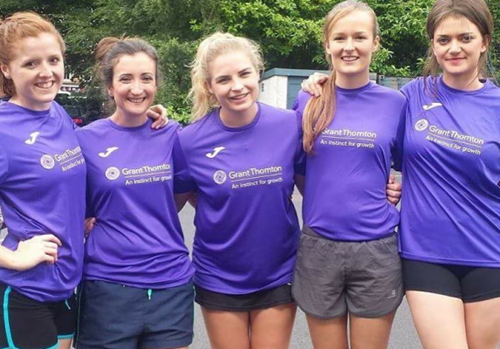 On Friday 29th July, a group of Norwich accountants descended upon the city of Glasgow for the annual GT Football Tournament. Taking the aviation route, surprisingly everyone adhered to the restrictions, bar Dean who brought too much hair product so had to spread into a colleague’s luggage.

With the leisure facilities being refurbished in the hotel, we had to find another way to get ourselves prepped for the tournament on the Saturday. With everyone disobeying the 9pm curfew imposed by the captain, the squad got their muscles loose by dancing the night away, with Spilling the Beans’ own Pete Waterman, in particular, demonstrating moves and shapes not seen in any dancing manual.

The tournament start was an early one, meaning not much sleep and rest was had, before the taxi to Goals arrived. The girls were afforded a longer lie in with their respective tournament not starting till the afternoon. However, they did amble down ready for the start of our tournament, to provide some much-appreciated support.

Once the early cobwebs had been removed with a warm-up, we were ready to begin the group matches. Norwich men’s were in the group of 6, meaning one more match than all other groups. 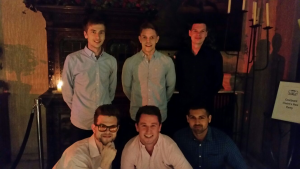 With no plate competition on offer, ruining our usual tactic, we had to perform well from the outset. The pre-match bananas worked perfectly with us comfortably winning our first match against FSCF (me neither..) 5 -1, with Dom scoring 2, Dean, Laurie and Pete all scoring too, despite some very heavy tackles early on. The perfect start was hampered by a last minute consolation that had Navin Sharma tearing his perfectly manipulated hair out.

A further win followed against London Valuations and then an entertaining 5-2 victory against FIS. Dom got us off to a perfect start with a penalty following foul play from the goalkeeper. Dean (2), Laurie and Pete then completed the scoring, with Dean portraying Paul Scholes tendencies with a long range effort. The 100% record was ruined in our fourth game, against an army of London auditors. The extra subs proved useful, with London winning 1-0. This could have been more had it not been for Navin “Uber” Van Der Sharma producing a fine triple save with every body part imaginable.

However, needing a positive result to ensure our progress in the final match against Thames Valley A, we were handed a very early lead thanks to a looping Own Goal. Navin in particular was delighted, as 12 months earlier he scored an own goal himself. The pressure was eased when Dom curled one into the far corner, ensuring that Norwich went through as group winners with 12 points (4 wins, 1 defeat).

After what felt like an eternal wait, we were then told we were facing Manchester C in the last 16. This news came as a shock to the majority of the team who were busy still working their way through the hot and cold food provided. With Chris side-lined with his annual injury, there were no subs and this combined with the extra group match took its toll on the fragile limbs of the Norwich team, who despite taking the lead through Dom, were pegged back and eventually lost 3 -1 to a very strong outfit. Going out at the last 16 stage was no mean feat, given the respective size of the offices, and the men’s team can be proud of being group winners for the first time in living memory!

This did however coincide perfectly with us being able to watch the girls tournament kicking off and, following previous performances, the Norwich girls sprang a surprise by not losing their first match, drawing 0 – 0 and earning a hard fought point against Thames Valley.

Having come into the tournament determined to score their first goal for 3 years, Helen did just that in their next game against FIS. Equalisers were then traded, with Claire getting the second before FIS finally ran out 3-2 winners by scoring a late goal despite Hannah’s efforts in vain trying to distract the FIS girl from scoring a penalty.

Confidence was not knocked, however, as the girls returned to win their first game since way back when, with Naomi evoked shades of Thierry Henry in his prime by slotting one into the far corner to earn the three points against Severnside. It was clear the girls were getting used to this football lark, when drag-backs and step-overs were applied by all, leaving the men’s team wondering where knowledge of such skill had been obtained.

The final match saw the girls come up against eventual group winners London Audit and, despite a second goal of the day from Naomi, they eventually lost 3–1. The girls bowed out at this stage finishing a very respectable 3rd in the group of 5 (4 points – 1 win, 1 draw, 2 losses). The aim for next year will be to beat this herculean effort.

With most opting for the comfort of the showers back at the hotel, a select few stayed until the end to watch the semis and the final of each competition – Scotland men’s retaining their title, and Sheffield girls triumphing in their final. This final, in particular, proved too exciting for resident “Beans mate” Pete, who dropped his phone through the cracks of the hoardings, ensuring he was blog free for at least an hour. With many different methods being tried, the phone was eventually recovered with the help of Dom, Chris, Dean and the centre manager Andy, who put on a great event that was wonderfully organised.

Previous article:
GT Football Tournament 2016 – A Glaswegian Account
Next article:
The Application Experience
Back to Blog